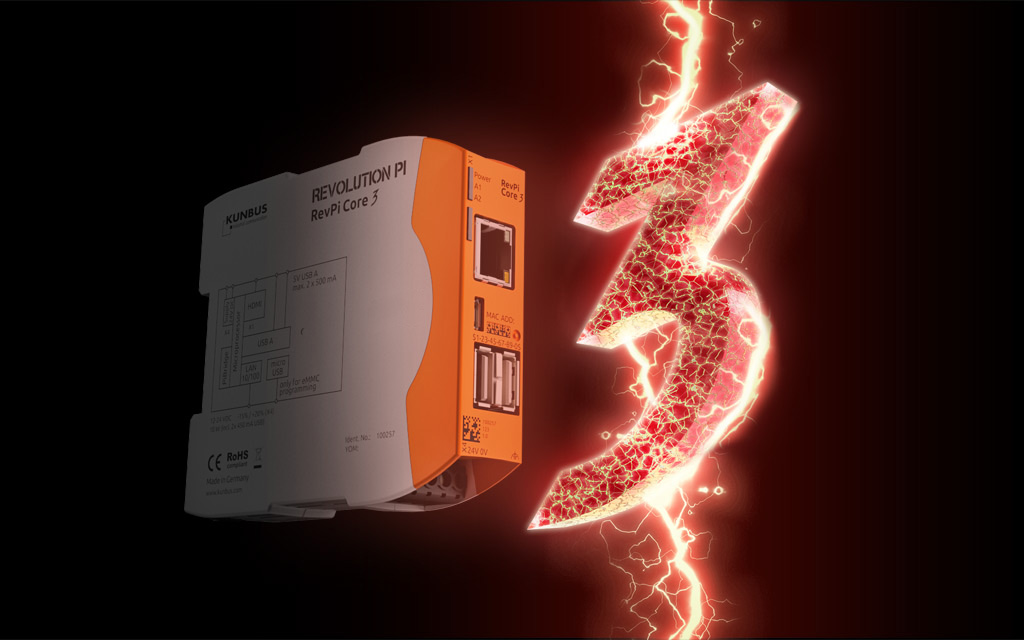 About five months after the Raspberry Pi Foundation started delivering the Compute Module 3 we are bringing RevPi Core 3 on the market: Our first and newest member of the Revolution Pi family which is equipped with a Compute Module 3.

Compared to Compute Module 1 the new Compute Module 3 has a considerably more powerful processor. The BCM2837 processor which has also been used for the Raspberry Model 3 has 1 GB of RAM. Its quad core and 1.2 GHz clock frequency are bringing turbo performance for our RevPi Core 3. While the Raspberry Pi Foundation is promising ten-fold speed we even have measured up to forty times more compute power for certain applications.

We also upgraded the software delivered with RevPi Core 3. Rasbian Wheezy is replaced by a Jessie adaption and many more new features (you will get more information in upcoming blog postings).

You could simply exchange your old CM1 against a CM3 because the Compute Module resides in a SODIMM socket and both modules do have identical pin layouts. But Alas! Things are not as easy as they seem to be…It took us five month of testing and development before we finally could release the product for series production. The problems with CM3 are caused by its tremendous compute power: power needs energy and energy consumption results in heat dissipation. The difficult task is thus to get this heat out of the processor.

Although the current consumption of our 24 V power supply is not much higher, still each single additional Watt of power consumption results in a problem. When correctly mounted upright on a DIN rail a thermal driven air circulation results inside the narrow fan-less case (ambient air is sucked in through the bottom slits and hot air exhausts from top slits). This “stack-effect” nevertheless is not able to take much heat away from the Broadcom processor due to its small surface. The result is a heat accumulation which – if not dispelled – can destroy the processor.

Broadcom has integrated an automatic down clocking mechanism to avoid such a destruction. When a temperature sensor of the chip detects too high values the normal clock frequency of 1.2 GHz is reduced down to values far less than 500 MHz. Not much is left of the CM3’s tremendous computing power.

While ruling out active fan cooling for our RevPi we had been left with finding a passive heat sink being able to transport as much heart as possible away from the processor to the ambient air. Meantime we have found a really effective one and could carry out extensive testing (including mechanical vibration because of much higher forces due to the high mass of the heat sink). During the heat tests we have stressed the processor to its limits by letting all four cores do nonstop calculations without interrupting memory accesses. You would rarely expect such stress in typical use cases of CM3. In real life you will probably not experience any speed loss even at high ambient temperatures. But during our climate chamber tests we observed the following down clocking:

So far the results of our temperatur testing.

Here is a final statement for all customers who already own a RevPi Core and would like to upgrade it: We do not offer any upgrade kits or instructions. You could easily get the CM3 from Farnell or RS components and could install the Jessie image yourself (we will publish it soon). Heat sinks are easy to buy and thus any one keen on DIY could give it a try instead of buying a second device. But we think even opening the case yourself results in the risk of breaking tiny plastic clamps and so we don’t want to encourage you to upgrade your hardware.

There is one more thing to know: Please do not expect the RevPi Core 3 to provide Bluetooth and WLAN functions like the “standard” Raspberry Pi 3 does. Both functions are not part of the Broadcom SoC (“System on a Chip”) and therefore they are not part of the Compute Module 3 functionality. They must still be realized by USB devices (WLAN can be realised using a WLAN stick like this one).