One Device – Fully Packed. Get your projects done with RevPi Compact,
the open source device based on Raspberry Pi.

The RevPi Compact is an open source compact controller based on the Raspberry Pi. Equipped with the Raspberry Pi Compute Module 3+, the control system has a quad-core processor with 1.2 GHz, 1 GB RAM and 8 GB eMMC flash memory. The open platform concept (including full root rights) allows the user maximum freedom of design when implementing his projects. To connect sensors and actuators, the RevPi Compact is equipped with eight digital and analog inputs as well as eight digital and two analog outputs. Two Ethernet interfaces (each with its own MAC address) enable the device to be integrated simultaneously in two different networks. The device also has a 4-pole RS485 interface with screw terminals.

The low profile design allows the device to be installed in sub-distribution systems, which are commonly found in building automation. The operating system used is an adapted Raspbian with a real-time patch. Individual applications can be programmed via Node-RED, Python or directly in C. The popular industrial protocols Modbus RTU and Modbus TCP are supported as standard. Those who do not want to program themselves can optionally use professional soft PLC and SCADA software for control and visualization.

Contrary to the standard Revolution Pi design, the RevPi Compact is not modular. In order to meet most common application requirements, the RevPi Compact is equipped with a large number of digital and analog inputs and outputs. The device has eight digital inputs and 8 digital outputs. For analog sensors or actuators, the device is also equipped with 8 analog inputs (0 – 10 V) and 2 analog outputs (0 – 10 V). The inputs and outputs can be wired via screw terminals located on the top or bottom of the instrument.

The two separate Ethernet interfaces of the RevPi Compact allow the device to be integrated into two different networks at the same time. For example, sensor data from the OT network can be transferred from the shop floor to the RevPi Compact via Modbus TCP and sent further into the cloud or a higher-level IT system using MQTT or OPC UA.

Even though Revolution Pi is an open system where everyone can install their own operating system and software, we have tried to provide Revolution Pi with software and apps that cover most use cases. As operating system we use a customized version of Raspbian, which among other things has a real-time patch of the kernel. In our opinion this is the best compromise to stay as close as possible to the original development environment of a Raspberry Pi and still get a high level of control over the priorities of the tasks the scheduler manages.

With this modified kernel, the scheduler that controls the execution of tasks by the operating system can be extensively configured to avoid the delays usually caused by network and other I/O accesses. Suitable drivers for the expansion modules are of course already pre-installed.

The RevPi Compact already has master and slave capability for the popular network protocols Modbus RTU and Modbus TCP. Modbus TCP works with the RevPi Compact’s existing Ethernet interfaces (i.e. via the RJ45 sockets on the front panel) or any other added Ethernet connection (e.g. USB WLAN adapter) that provides the TCP/IP protocol. Modbus RTU can be implemented via the 4-pin RS485 connector. The master and slave configuration is controlled by our browser-based, graphical configuration software PiCtory.

The pre-installed open source software Node-RED is an excellent tool for the realisation of simple automation tasks and rapid prototyping. 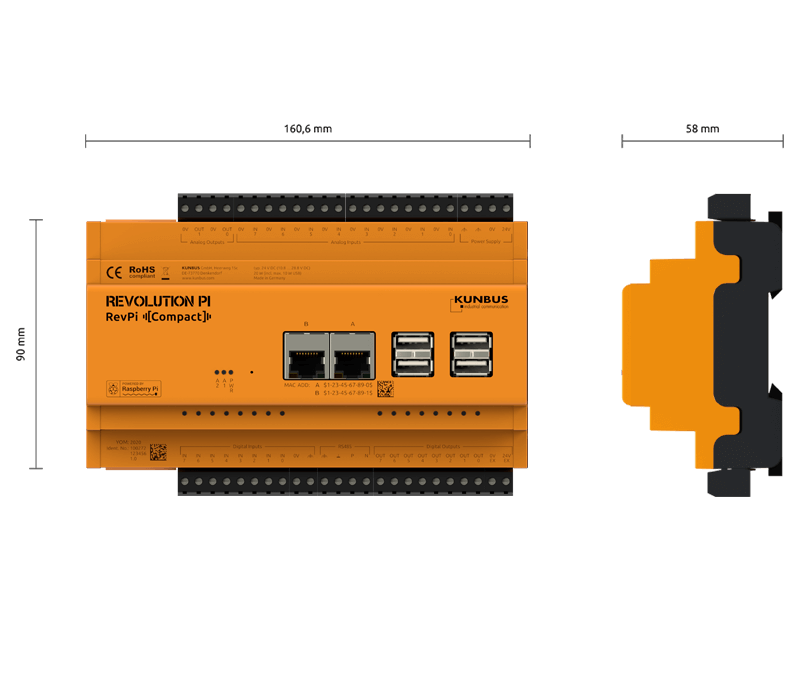 One of our key goals was to give the Raspberry Pi real industrial capability to turn it into a true compact control system.  That`s why the DIN rail housing of the RevPi Compact is fitted with robust 24 V industrial hardware that complies with the EN 61131-2 standard.