The growth opportunities in rail transport are enormous. ATO (Automatic Train Operation) and ETCS (European Train Control System) are no longer just illusions and, together with advanced signaling systems, are expected to provide new, better efficiency and safety standards in the near future. Such innovative rail technologies are currently being intensively researched, developed and tested on the approx. 24 km long test track of the Smart Rail Connectivity Campus near Chemnitz. Lucy, a laboratory train from Thales Germany, is also in service here. Lucy, which by the way is named after Lucy van Pelt of the Peanuts, is a rather old vehicle with a relay-based control system that has been extensively converted and refurbished and is now equipped with a suite of state-of-the-art sensors and massive computing power. 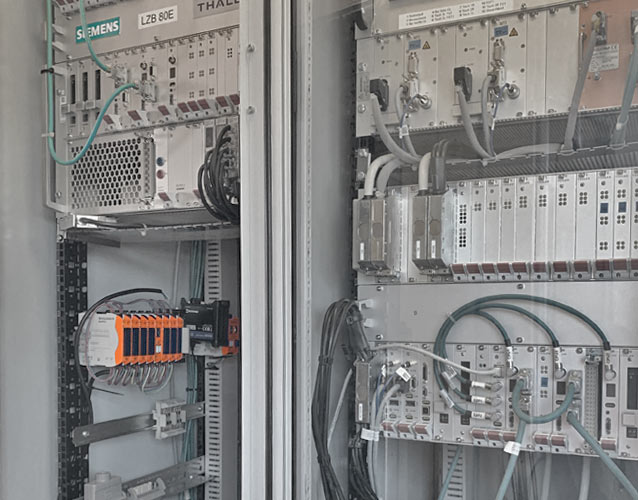 The Railergy company has developed a TCMS (Train Control and Measurement System), which is equipped with interfaces for remote control, ATO and ETCS, making the lab vehicle an open platform for the validation and testing of current and future technologies. For the hardware, Railergy has used the Revolution Pi. Revolution Pi is predestined for such a project because of its open, Linux-based platform concept, its flexibility and its high performance and storage capacity, and is compatible with the model-based development tools and processes used by Railergy. In principle, every software/application is supported. In concrete terms, this means that the software used by Railergy can be easily certified in accordance with the required safety integrity level SIL4 under the EN50128 standard and later reused on another platform.

Railergy used various Revolution Pi modules for implementation, including a RevPi Connect, as well as a RevPi Core 3 with matching digital and analog I/O expansion modules. Driverless, but networked via the new 5G technology, Lucy can now be controlled remotely. For this purpose, the train driver sits in an outsourced driver’s cab with a special remote-control system, which also contains a RevPi system. The relays, the digital status outputs and the analog sensors can be easily integrated using the RevPi expansion modules.

Railergy develops software and systems to increase operational and energy efficiency in railroad operations (ATO), as well as in railroad signaling (ETCS, STM). Railergy also offers consulting, training and development in the field of safety-critical software. Furthermore, the company develops software and systems for the intelligent control of energy networks, especially in developing countries.