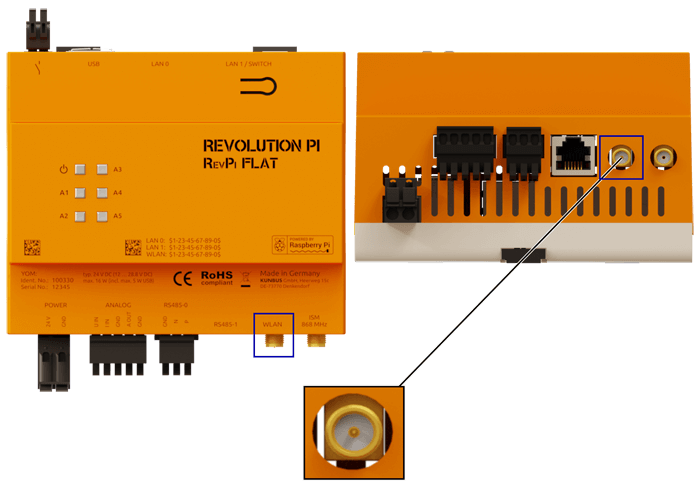 Here you can either connect a WLAN rod antenna directly or an external antenna via an appropriate antenna cable. When selecting the antenna, note that the antenna connection is implemented as an RP-SMA socket (“reverse polarity”).
The WLAN interface operates at 2.4 and 5 GHz and complies with the IEEE802.11a/b/g/n/ac specification. It is connected to the Compute Module via the SDIO interface (GPIO34-GPIO39). A Cypress CYW43455 (formerly Broadcom BCM43455) WLAN/BT chip is used.

Under Linux you can address the interface as “wlan0” (by default, without other WLAN devices).

Note: In order to use WLAN and Bluetooth, you have to activate it once in the web status .

You can configure the WLAN interface via the command line as follows.

Setting up WLAN via the Command Line

The “wpa_supplicant” tool can configure network interfaces and establish a connection to wireless networks. You can read how to set up WLAN on the RevPi Flat via the following link in the section “Adding the network details to the Raspberry Pi”.

A Bluetooth interface is also available via the same SMA socket as for the WLAN interface. This complies with Bluetooth standard 5.0 and is connected to the Compute Module via an FTDI USB-to-RS232 converter.

BlueZ is the Bluetooth system for Linux that allows a RevPi Flat (Raspberry Pi) to communicate with classic and low-energy Bluetooth devices.

You can find more information about BlueZ on the official site: http://www.bluez.org/

“bluetoothctl” is the command line interface to BlueZ.

If you want to configure Bluetooth devices with “bluetoothctl”, you can find more information here: