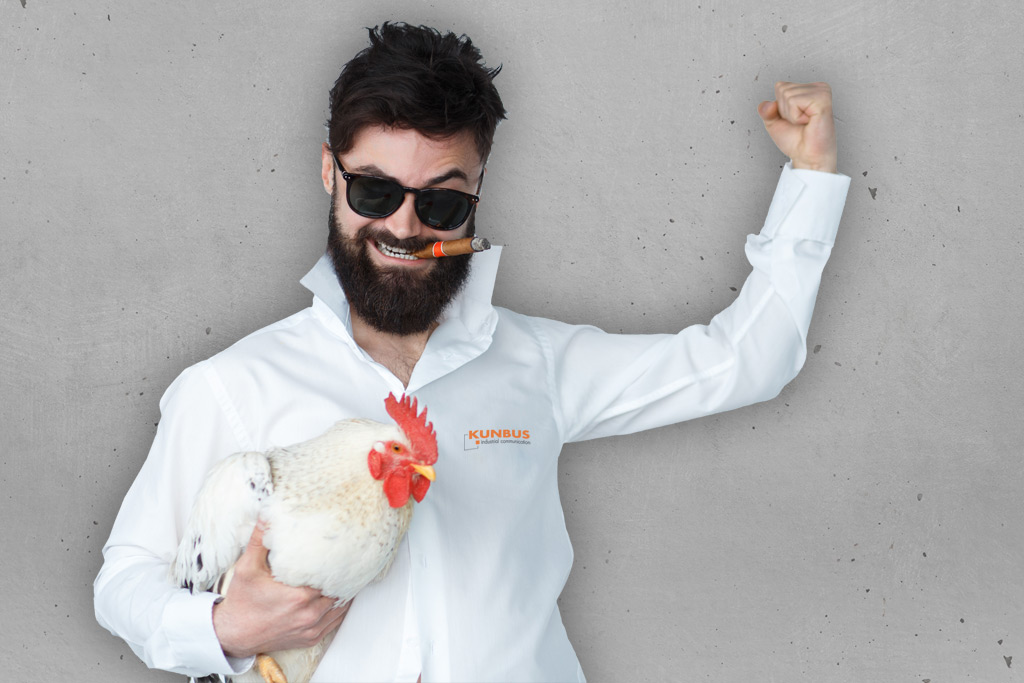 We (KUNBUS GmbH) proudly announce to be decorated by “Landespreis für junge Unternehmen” (“federal state award for young companies”) of Baden Württemberg out of over 600 nominees as one of the “Top-Ten-Companies 2016”. But what has this to do with Revolution Pi? Well, we pinned all our hope on the brilliance of Revolution Pi when presenting our company to a top-class jury. Todays newsletter is about how we explained Revolution Pi to this jury.

We were sure an ordinary Powerpoint presentation would be definitely the wrong tool to explain such a complex project to a jury full of politicians, bankers, managers and journalists. We knew we would have to make it really visual and close to reality. Our aim was to construct a functional model which would visually demonstrate two main features of Revolution Pi:

Our model represents a factory building with smoke detector and water alarm. In case of an alarm the system sends an SMS to pre-defined receivers. On smoke alarm the factories lighting is automatically switched on and on water alarm the main water valve is automatically shut by the system. Both alarms are additionally starting a red flashlight mounted on the factory’s wall. Factory lights are switched on and off by EnOcean remote pushbuttons. The factory’s ambient temperature as well as the state of the lights can be monitored from any place on the world via Internet using a Smartphone. The lights can also be remotely switched using the Smartphone. 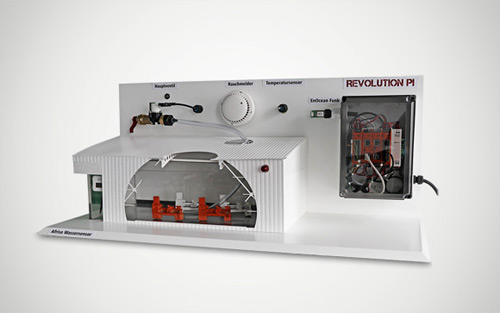 So how have we realized these functions?
We used one RevPi Core with the open source building automation software FHEM installed. The software comes with a driver interpreting EnOcean remote data telegrams received by an USB wireless EnOcean transceiver. Smoke detector, water alarm and pushbuttons are sending such data telegrams triggered by events (e.g. alarm, button pressed or low battery). FHEM controls the lights, the valve and the flashlight by Pearl scripts. Such a Pearl script writes the IO states into the central process image using our function calls to our main IO driver PiControl. The driver sends the states to a DIO module which actually switches the devices on and off. Using another script FHEM also initiates the sending of alarm SMS. This is done by HTTPS-calls to our SMS cloud service. This service sends a predefined SMS containing the alarm reason, time and location to any mobile device (we used an Android tablet with the SMS-App “Fire Alert” – making lots of noise and vibration as soon as a certain SMS is received).

The state of the factory’s lighting is monitored by an input channel of a second RevPi DIO connected to a second RevPi Core which runs the Raspberry Pi IoT application “Cayenne”. This application normally monitors a Raspi’s GPIOs and connected sensor values and sends them to a cloud. From there you can visualize this data on any mobile device (building your personal dashboard) and even switch simple digital devices (like relays) connected to Raspi GPIOs by your mobile device. As Cayenne only works with original Raspi GPIOs we had to use a trick to get our central process image data to the Cayenne cloud: A tiny driver is cyclically copying the state of certain GPIOs to and from the central processing image. This way Cayenne had read and write access to the buildings lighting state. Cayenne also does only accept a certain selection of temperature sensors, mainly connected by I2C bus of the Raspi. So we had to use a trick again: We simply connected the internal I2C of RevPi Core to the unused Ethernet pins of the PiBridge and thus fed the signal right into a DIO module where we connected it to some unused Input lines of the Io Connector. Using this little trick we got the I2C lines of the Compute Module exposed on a DIO connector and could wire the temperature sensor to this connector (in a not electrically protected and industry compatible way). But you know for sure: You need to overcome your scruple and get the stuff just running for such an occasion – at a pinch without EMC…

After having survived two presentations in front of a jury and receiving the award as Top-Ten-Company our factory model has started its well deserved retirement and will get its place of honour in the company’s archive.