When you log on your RevPi Core, you are automatically in your home directory as User pi@RevPi. You will recognise it by the symbol ~ after your user name. In your home directory, you have the full access rights to all your files. Here is where you can archive and administer for example documents, videos or audio files.

You however need system administrator rights for some functions. An example is the shutting down the RevPi Core.

You naturally don’t have to leave your RevPi Core on for the whole time.

In the following section, we will describe how to shut RevPi Core down properly. 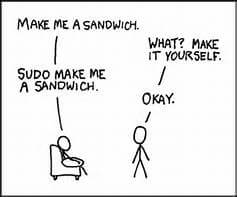 You can thus access, for example, system data, install programmes and for instance using “sudo shutdown –h 0” shut down your RevPi Core properly.